“A Science Concerned with Human Well-being”: 120 Years of Psychology at Oxford

2018 marks the 120th anniversary of the founding of the Wilde Readership in Mental Philosophy –  which can be considered the beginning of the official study of psychology at Oxford. This post was established in 1898 by Henry Wilde, a successful electrical engineer who also endowed scholarships and posts in philosophy, religion and astronomy. However, Wilde explicitly forbade the Reader in Mental Philosophy from using experimental methods. As historian Jack Morrell comments:

"Wilde had firm views about his readership in mental philosophy. He intended that it be securely based in the faculty of literae humaniores and that it should promote Lockian methods among undergraduates. He insisted, therefore, that his reader should study the human mind by observation and reflection on experience, while excluding any form of experiment" (1) 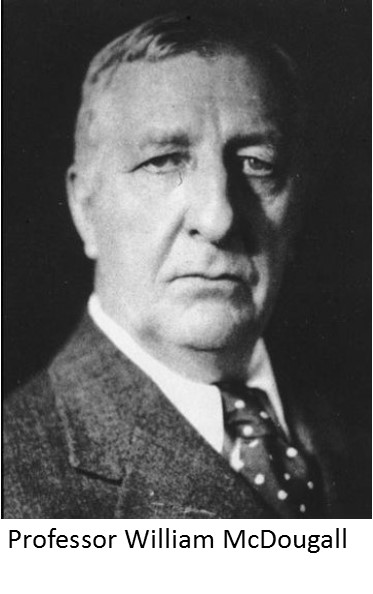 While the first holder of the post, G F Stout, managed to pursue his research within these restrictions, the second post-holder William McDougall attempted to work around them. He established a laboratory in the Department of Physiology, where he pursued his research interests in colour vision and fluctuations of perception. Although Wilde attempted to persuade the University authorities to put a stop to McDougall’s experimentation, McDougall’s research was instead curtailed by the outbreak of World War I. He left Oxford to serve as a major in the Royal Army Medical Corps from 1915 to 1919, where he specialised in treating soldiers with ‘shell shock’, what would now be called PTSD. On his return in 1919 he found that his laboratory space had been re-occupied, leaving him with nowhere to conduct his research.  Becoming increasingly frustrated, McDougall left Oxford to take up the William James Chair of Psychology at Harvard University in the summer of 1920. 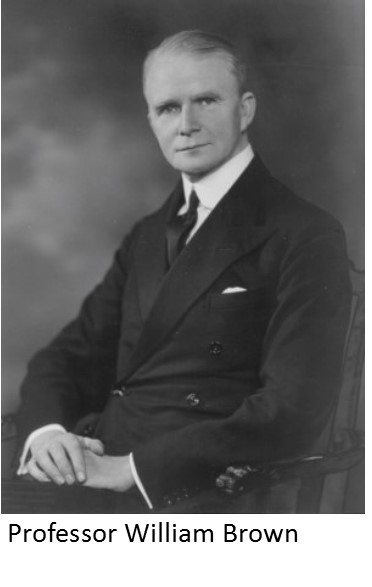 In 1921 William Brown succeeded McDougall to the Wilde Readership. Brown, who treated patients at King’s College Hospital in London, was interested in both mental measurement and psychotherapy. He also struggled with the constraints of the Readership, writing in the British Medical Journal that

Oxford has been singular among great universities in possessing no laboratory of experimental psychology… After having worked for twelve years in the well-appointed psychological laboratory at King’s College, London, it was a disappointment to the new reader to have no facilities of accommodation or apparatus for experimental work on his subject (2).

However, things were about to change. Following widespread interest from students in lectures in experimental psychology, sometimes in such numbers that “no lecture room at Christ Church could accommodate them, and an adjournment... had to be made to the hall” (3), a proposal  was put forward to create a new Institute of Experimental Psychology. The Institute, which would include a laboratory, lecture room and equipment, was to be founded on the site of the former St Giles School at 34 Banbury Rd. The University approved the proposal, and financial support was secured from the Rockefeller Benefaction for Research in the Social Sciences and a private donor named Anna Watts, a friend and former patient of Brown’s.

Anna Watts, who was known as “Mrs Hugh Watts” in official correspondence, made her gift of £10,000 very modestly - as former Head of Experimental Psychology Larry Weiskrantz commented, “her letter and cheque arrived without any embellishment or legal instructions, bearing simply the return address of a London hotel” (4). Yet it provided psychologists who had previously had little access to laboratory space with room to conduct empirical studies, and paved the way for the future of the department.

World War II interrupted early plans to provide teaching for undergraduates, but in 1947 the first Professor of Psychology, George Humphrey, was appointed to preside over the new Honour School of PPP (Psychology, Philosophy and Physiology).

Ten years later the Institute had grown substantially: as Weiskrantz recalled, by the late 1950s

The Banbury Rd building was tiny and ill-equipped, even with the motley cluster of small temporary huts behind it. The first Professor’s office was a converted outside lavatory. Being summoned to a meeting with him was an ordeal… (5)

The Institute moved next to a large Victorian house at 1 South Parks Rd, with further outbuildings placed in the garden and on Keble Rd. In the late 1960s Experimental Psychology was established as a stand-alone single-subject honours school, bringing Oxford Psychology in line with provision at other British universities, and a second chair was created – the Watts Professorship of Psychology. In order to name the chair after Anna Watts it was necessary for the department to advertise for surviving members of her family in the Times – who came forward to give their blessing. In 1971,the department’s modernisation was complete with another move into the purpose-built Tinbergen Building, shared with Zoology.

The 1970s and 80s also saw the rise of new avenues of investigation including greater focus on developmental psychology. The 1990s were marked by the growth of neuroscience as an area of research, including work on transcranial magnetic stimulation, electroencephalography, magnetic resonance imaging and other forms of neuroimaging.

1997 also marked the first year of both the MSc in Neuroscience and the FMRIB Centre. Interest in this area continued to grow throughout the first two decades of the 21st century. In 2001 the department officially became part of the Medical Sciences Division (one of the four divisions of the University) while maintaining strong links in the areas of Philosophy, Linguistics and Social Sciences.

Looking forward from his position as the Wilde Reader in 1936, Brown commented that it was “a great satisfaction” that there would one day be “a complete department of psychology where Oxford students and graduates from other universities… will be able to study every aspect of a science which is concerned on so many sides, and so fundamentally, with human well-being” (6). It is clear that this concern is still being carried forward by the department and its researchers in 2018.

With special thanks to Professor Oliver Braddick and Karine Barker for much of the information and many of the images included above.

114 Years of Experimental Psychology in Oxford