Researchers share their science at IF Oxford Science and Ideas Festival

The first annual IF Oxford Science and Ideas Festival (formerly Oxfordshire Science Festival) is officially underway! Whether playing games, running experiments or even sharing neuroscience research through drama, our researchers have been in the midst of the festival sharing their work and ideas with the public and inspiring the next generation of scientists and thinkers.

The first day of the Festival kicked off with an unexpected challenge in the form of Storm Callum, which meant that the 'Big Ideas on Broad St' science festival had to be hastily relocated indoors! The Weston Library on Broad St proved to be an ideal alternative venue, with members of the Attention, Brain and Cognitive Development Group, the Language and Cognitive Development Group and the Cognitive Neurology Group sharing their work on the development of perception and attention in young children, word recognition skills and reading, and the development of conditions leading to dementia. Plenty of Junior Scientists stepped up to help by participating in the Word Detective and bubble-popping games, while the Stroop Effect Challenge leaderboard reflected keen competition between researchers and members of the public! 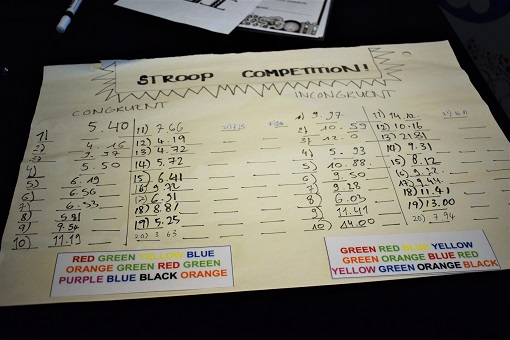 Saturday saw the first day of 'Explorazone', a family science fair held in the Oxford Town Hall. Researchers and student helpers from the Developmental Neuroscience Lab were on hand to help young visitors (and their parents!) understand more about the teenage brain, why adolescents make decisions in a way that is different to adults, and how researchers are working to understand this better.

Later on Saturday evening, St Aldate's Tavern became the venue for an exciting theatre production - a sold-out performance of Martin O'Neill's play 'Waiting for Pavlov'! Set in a pub, the play stars Seamus and Gerry, who meet at their local for a weekly pint and end up discussing big ideas in psychology and neuroscience with a large splash of humour and banter. The event's departure from the traditional format of public talks proved successful, as the audience responded with laughter, applause and positive feedback all around.

IF Oxford continues this weekend, with 'Science at the Shops' running at the Templars Square Shopping Centre from 9am-5.30pm on Saturday Oct 20th - featuring members of the Thalamus, Cortex & Cognition group with hands-on brain science!